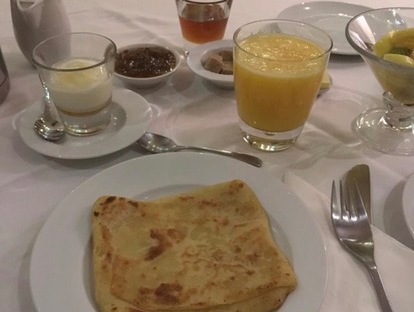 For many years I woke up to the sound of the prayer clock’s simulation of the call to prayer, never imagining that one day I would find myself in the middle of Morocco standing in the Atlas Mountains, with my hands raised in prayer as the call to prayer echoed from mosques across Morocco.

As an American citizen, where prayer isn’t allowed in public schools and where it’s uncommon to find someone taking a break for prayer in business, it’s commonplace for families to say prayer at the table before eating and once more before going to bed. However, a Moroccan’s day is scheduled around the five calls to prayer and five meals. They break their fast with an early morning breakfast, a mid morning snack, lunch, a break for tea and bread and a late dinner.

By the second day, I looked forward to having lunch on the rooftop of my Riad during prayer and oftentimes I would just sit in silence and take in the moment while sipping the best Moroccan mint tea in the world.  A few days later I discovered why the tea was the best I’d ever had.  There’s at least two cups of sugar in the beautiful silver tea pots.

Typically men work from sun up to sun down, doing labor intensive jobs and in many cases they walk to and from work. If you add the heat/sun to this equation and the fact that most of them work outside, it can be quite exhausting if they are not properly nourished.  Consequently, bread is a staple in their households and it’s almost always on the table, eaten at every meal, to provide them with fuel for energy throughout the day.

Most of the time I only ate three meals because the first meal was so heavy.  As an American whose body is accustomed to processed foods and preservatives my body would’ve held on to every loaf of bread and pancake that I ate, especially since the only work or working out I did was walking in the mountains or up and down stairs.  Moroccan’s make their bread fresh daily without yeast, it’s typically barley or other grains, their fruit is fresh with no pesticides and the chickens that I saw in the souks every morning was more than likely dinner that night.