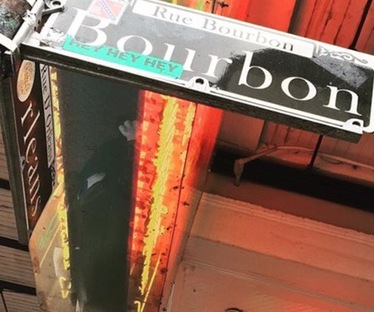 With rhinestone sandals, Oliver People sunglasses and a Vince Camuto handbag there I stood in full tourist fashion in front of the oversized grandfather clock in the lobby of Hotel Monteleone.  A block away from Bourbon Street, Monteleone totes itself as a luxury hotel with bragging rights of having Ernest Hemingway as a guest.

I had arrived with very specific intentions: eat as much seafood gumbo as my stomach could hold, experience the infamous Bourbon Street, hit up Café Du Monde’s beignets, hear a little jazz and see, with my own eyes, the aftermath of hurricane Katrina.

But first… .25 cent martinis were on the agenda. We had arrived just in time for brunch at SoBou.  I was torn between the Cannonball (jasmine tea infused black rum, with coconut and lime) and the Pink Elephants on Parade martini, so I had both.

If television didn’t exist and you had simply flown in on a whim, for vacation, you would have no idea that 80% of the city flooded just ten years prior, killing hundreds; as there were no clear or obvious traces of Katrina, up to this point.  On every corner, there was music: singing, harmonizing, instruments, smiling and dancing. But later I’d think back on SoBou’s beautifully lined wall of glistening apothecary jars and draw a parallel to the French quarter.  The French Quarter was really an apothecary that offered pain relief, but no cure.

A few hours in and I had sinfully inhaled several cups of the best seafood gumbo, had a face full of beignet powder, glanced down a sleeping Bourbon Street, sweated my hair out and tasted premium liquor at cheap liquor prices. All was wonderful in my world. Several missions were accomplished before the sun began to set (in more ways than one).

In an effort to do all things NOLA, against our better judgment and much pressure from the waiter, we tried Sazerac. It’s Cognac or Whiskey, Sugar, Absinthe and Bitters. Two sips and twenty minutes of watching a lady try and get her drunken companion out of a flower pot and into a cab; and it was time to exit the balcony of Tableau.

As we stepped into the restroom on our way out, it didn’t take long to figure out that the two 5 gallon jugs of water sitting on the countertops didn’t quite match the aesthetics of the restaurant. The sign on the jugs read, “…boil order… water should be boiled before using it to drink, bathe, shower, brush teeth, prepare food, etc.” That’s when New Orleans’ aftertaste started to settle in.

Because we weren’t falling over like the masses, we ventured over to Pat O’Brien’s for Hurricanes. Soon thereafter we returned our half empty “signature glasses” for a refund of our glass deposits and then we headed back to the hotel.

Hotel Monteleone sent extra bottles of water to our room and for the next 31 hours I ran bottled water through the coffee maker (don’t judge me) to heat it to brush my teeth, bathe and to drink.  We’ve all had a boil order at one time or another in our own cities, but the hundreds of dead bodies, estimated at 1,800, decaying and floating in the water just 10 years earlier wouldn’t allow me to disregard the order.  I only had one day left in NOLA by the time the order was lifted, so I didn’t have to reconsider whether or not I wanted to consume or use un-boiled water.

Smelling like Folgers, off I went the next day to tour the lower ninth ward.  It was here that I gained an appreciation for a tour guide that was organic to the culture, circumstances, city, neighborhoods, language, etc.  He brought the graffiti like markings and X’s on the abandoned homes, the empty lots and the properties that were in rehab to life with names, stories and details that only a native and someone deeply affected by such a tragedy could.

But unlike the French Quarter on a Saturday at noon, it was as still as the above ground headstones that we tiptoed thru trying to avoid fire ants on the cemetery tour. There was no life, just suffocating spirits.

Being one of the 9.5 million visitors contributing to the uptick in hotel revenue post-Katrina from $1B to $1.37B in the French Quarter; as your air conditioned coach bus bypasses the blue house pleading for donations, you question if your visit helps or hurts their cause. It’s all too evident that the revenue to rebuild seems to be bypassing them at the same speed.

As the bus turned and the tour guide’s tune changed we were off to brighter things. Moments later we were in the upper ninth ward; where Habitat for Humanity stepped in to help rebuild the community by building 72 single family homes for low income families (Musicians Village). One would think that the colorful homes and the brand new beautifully designed “empty” park that greeted you at the entryway would lift your spirits, but it was sterile. In my head, Luther was singing a house is not a home.

This attempt at recovery was equivalent to putting a band aid on a broken leg that needed surgery, a cast and rehab. Yes, it will eventually heal itself, but it will be a long and painful process and more than likely it won’t heal suitably. Re-placing less than 200 people in a community where more than a million were displaced is certainly a step in the right direction, but it’s hardly progress when you take into account that it’s been 10 years.

On our way back to the French Quarter we drove past endless trees filled with Mardi Gras beads, took a loop around Sculpture Garden and exited on Canal Street. But before exiting, the driver announced that a storm was moving in and that the river was two feet away from flood levels, so we decided to take cover at our hotel’s rooftop pool & bar.

Once the storm passed, we made our way over, around and under the crowds on Bourbon Street hoping to find dinner. It was fun while it lasted…all twenty minutes of it, before we decided the Court of Two Sisters was a better option. I would argue that it was the best restaurant decision we had made thus far and we left with a little bit of charm to boot.

Sunday was packing day, but we couldn’t leave New Orleans without one more cup of gumbo & a few more beignets so we stopped for beignets before heading to a cooking class at the New Orleans Cooking School, where we made bread pudding, jambalaya and gumbo. Having breakfast was a bad idea considering the time of the class, as we were both too full to really eat any of the food, but the experience and the recipes was worth the expense.

Full, fat and sleepy, I retrieved my luggage from the hotel and Uber took me to the airport. 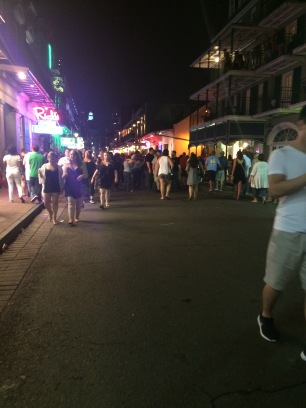 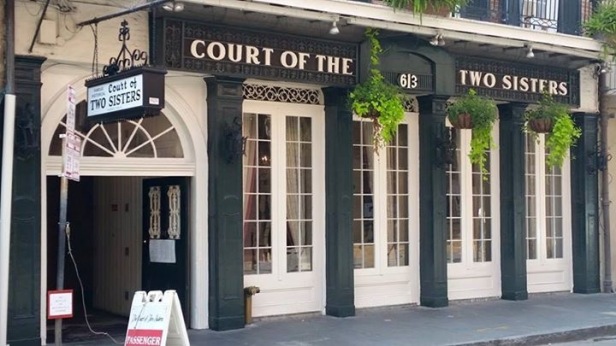 Although my final drink in NOLA was sweet tea, it left me with a taste of Sazerac. New Orleans and its native drink have a lot in common.  It’s full of flavor, with a strong scent, it is bitter and it is sweet and while the French Quarter seems to have made a full recovery, New Orleans still needs lots of rehab.

2 thoughts on “Above Ground in Nola”